Here is a project describing a very high quality headphone amplifier built around the TI’s buffer IC – BUF634. The project features a complete design including PSU section, input section, volume control and output connector.
The whole design is completely DC coupled form input to output. The BUF634 IC was used to boost the output current of the op-amp forming the input stage of the amplifier.

In order to keep the DC offset at the output low enough it is recommended to use precision op-amps like OPA132. FET input is preferable. This gives you high input impedance and low gain error. Of course for really low cost application one can you the traditional NE5534. However you may need to set a small compensation capacitor across pin 5 and pin 8 of 5534. A value of about 10pF would be enough. The other way is to have the stage gain set at higher value. Resistors R9/R8 and R14/R13 set the gain of the stage. With the default values the gain is set at about 15dB or G=5.7

The input signal is passed through a low-pass RC filter formed by R5/C15 and R10/C22. Omitting this filter will cause a small overshoot when testing with square wave. Bare in mined that BUF634 is a wide bandwidth IC (so are the input op-amps). Some form of high frequency suppression is good to have as we are only dealing with audio frequencies here.

The power supply is a bit nontraditional. It uses two bridge rectifiers to form the two power supply rails and the GND. This means you will need a transformer with TWO SEPARATE secondary winding. 30VA transformer providing about 2x17VAC is sufficient to power this amplifier. The decoupling capacitors around the optional. Those are suppose to reduce the noise coming from the diodes. I have never actually been able to hear any audible difference between “bypassed” and “non bypassed” bridge rectifiers so I leave that to your own personal judgement. Mounted or not one thig is for sure – they do no harm. The rest of the PSU is pretty straightforward. It is regulated power supply using the traditional LM317/LM337 regulators.

From the power supply each rail is then delivered to the op-amps trough individual LC filtering.

The PCB is two sided with large GND copper pour for improved noise and parasitic interference shielding. The two input op-amps are in DIP package to allow for further experimentation. Those are in many of the cases, a subject to personal taste. However I’m giving a small list of op-amps that in my opinion are suitable for this project:
LT1022, LT1468, LT1028, OPA602, OPA604, OPA227

THIS PROJECT IS AVAILABLE FOR DIY AND PERSONAL USE ONLY. COMMERCIAL USE IS NOT ALLOWED WITHOUT AUTHOR’S EXCLUSIVE PERMISSION!

THANK YOU FOR READING!!!

Unbalanced to Balanced Converter For Audio With DRV134

Here is a quick project on using the DRV134 for converting an unbalanced to balanced signals. This type of signal transmission is usually associated with the professional audio or PA systems. It is a widely spread common “knowledge” that balanced signals sound “worse”. Those things are not top priority in most of the so called audiophile systems. However I don’t suffer from such prejudice.
I think balanced transmission lines are actually superior to the unbalanced once if done properly. Sometimes you might hear that balanced isn’t worth the efforts for such a short distance, like home audio. That might be true. However It’s a common knowledge that balanced cables have almost (if any at all) no impact on the sound quality. Properly terminated balanced line will give the almost perfect connection between two stages. And the best part is that you don’t need to shell out your one month salary to buy those super-duper unbalanced audiophile quality cables anymore. All it takes is a good studio quality cable and some nice well made connectors. Personally I’m more than happy with Neutrik connectors.
To make a good balanced line you need a proper termination for the both ends of the line. That’s where the unbalanced cables shine – they don’t need any termination. If you have a poor termination to the balanced cable you will end up with poor sounding system.

So how to do it? Well one way is to go fully discrete. That will give some great results but requires a lot of skills and will cost a lot. There is a more conventional way using opamps. Here is an example:

This one is the most basic way to make a unbalanced to balanced convertor. This one however does not present an equal output impedance to the bots sides of the line. Its only pros are that is cheap and can do the job if you have nothing else to use. 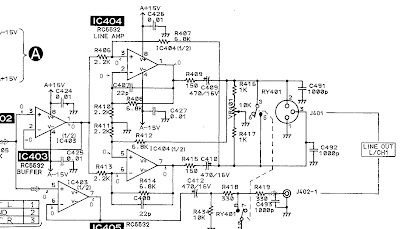 This one is used in my professional CD player – the Sony CDP-2700. IC403 is the input buffer, which provides impedance match to the low-pass filter of the previous stage. The conversion is done by the two opamps (actually it’s one dual opamp IC404) and it’s pretty straightforward. You have one inverting and one non inverting amplifiers with the same gain and mutual feedback. The trimmer at the output is there to allow setting for maximum performance. It helps to balance the two stages by improving CMRR and minimizing distortion. This is because you can never have discrete resistors precisely ant tightly matched. This circuit will require a scope and distortion analyzer for the best performance. The other way is to buy some large quantities of resistors and measure each and every one. This will of course come at a price and will require a lot of time and efforts.

The best (and easiest) way is to go fully integrated and use one IC to deal with all. These have internally laser trimmed resistors and allow for the best common mode rejection ratio (CMRR) and minimum distortion.

One such IC is the TI’s DRV134 and DRV135 AUDIO BALANCED LINE DRIVERS. These offer a complete solution for balanced audio signal transmission. This is how the circuit looks like: 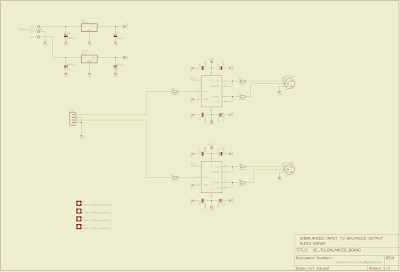 The schematic is pretty much the suggested in the datasheet here: 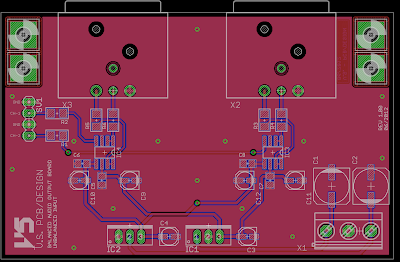 The project is finished on a two-layer board to allow maximum shielding via ground plane and lowest noise.

The complete manufacturing files are available for download HERE

PLEASE NOTE – This project is available for personal use only. Any commercial usage is NOT ALLOWED.
THANK YOU FOR READING

Here is a truly classical implementation of the diamond buffer. A headphone amplifier.
There isn’t much to be said about this topology. It’s pretty popular and is used in variety of applications. One application is buffering an opamp’s output so that it can drive low impedance high capacitance loads like a pair of headphones. Here is a schematic showing the diamond buffer as a current booster for an opamp: 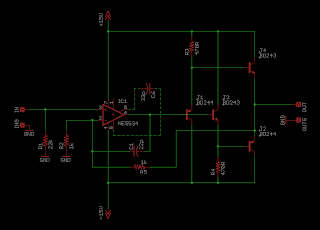 The gain is set by the resistors R5 and R2. If you are using NE5534 the C6 capacitor is a must when gain below 3 is set. For more info on this read the 5534 opamp datasheet.

The buffer is biased in pure class A at about 30mA. That will give a plenty of headroom for plenty of voltage swing. To calculate the quiescent current use the following equation:

This amp will output a substantial amount of power so it must be used with care. Always switch it on with a volume pot set to minimum. It’s very easy to damage you hearing so be warned!

The PCB artwork is available for download HERE. You need two PCB’s for a stereo application.

Yet another TAP6120 based headphone amplifier you’d say. Well maybe you are right. This one started as a group project involving myself and few other guys forum mates. So here it is – the UBIQUITOUS TPA6120 amp.
The TPA6120 chip is a rather strange beast. Looking at the TI’s portfolio of headphone amplifiers you would not find any other amp similar to this. Especially if you look at the slew rate. So why is that? The answer is rather simple. The TPA6120 chip is actually a re-branded high speed line driver that had failed to meet the requirements. This is a common practice among the manufacturers. Many so called “audio opamps” are actually the same thing – lower grade opamps that had failed to meet the criteria.

However failing to comply with the high speed line driver requirements does not make the TPA6120 chip a useless junk. Believe it or not it’s an excellent performer. Many people believe that it can outperform much more expensive headphone amplifiers. I don’t want to put any thoughts on this mater though.

Some facts about the TPA6120 chip – as it’s a high speed IC it requires a careful PCB layout. Any parasitic capacitance may cause the amp to go unstable; – the chip is rather hard to run alone. The simple truth is that you may destroy your headphones if you don’t put any attention to this. The chip will have a severe DC offset at the output depending on the volume pot setting. This can go up to several volts. You wont find this in the datasheet so BE CAREFUL!

This being said I’ve decided to go safe. This design uses an input opamp based stage. It’s not an ordinary two stage project though. This design is based on the so called COMPOSITE opamp design. This approach uses the best of both CFB and VFB design worlds. More info on this matter can be found here:
http://focus.ti.com/general/docs/lit/getliterature.tsp?literatureNumber=sboa002&fileType=pdf&track=no

I went for the non inverting design.

I’ve decided to use opamps in DIP package for an easy experimenting. However you could use just about anything you find suitable and use a DIP->SOIC adapters. Just remember that you need a PRECISION opamp in this stage. This would help keeping the DC offset low.

Few words about the project realization. This one is completed on a two-sided PCB using smd components and TH metalization. A special attention was paid on the bottom ground plane to minimize the parasitic capacitance. More info on this matter can be found in the TPA6120’s datasheet:

The power supply regulation is complete on the board itself near the TPA chip. This requires a +/-18 to +/-21VDC prefiltered.

The complete schematic for this project can be downloaded HERE. 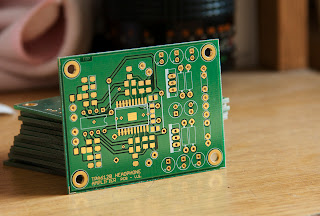 Since it was the first batch of PCB’s I had some problems with the silkscreen printing. However it’s not a big issue at the moment. In order to keep the return paths as short as possible I was forced to use jumpers. This could be easily solved with a 4-layer PCB. These come at a price though.

WARNING: This project was brought to the DIY community for free. It is intended for personal DIY needs only. Commercial usage of this project is not allowed!