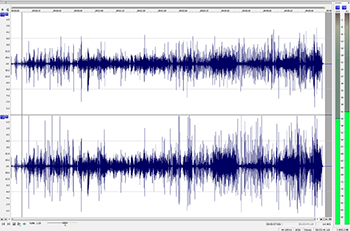 In general we listen to musical performances in two basic ways. The first one involves an actual attending to real live music events (a concert, an opera, ballet music festival etc.). In this case the musical content we perceive is called ORIGINAL musical (audio) content (OAC), unlike the REPRODUCED musical (audio) content (RAC), which we perceive by using electronic and electro-acoustic devices. For the purpose of this article I will use the terms original audio content and reproduced audio content.

The reproduced musical contents are generally divided by two groups depending on the time we listen to them.

The first type is the so called synchronous audio contents. Those we get when we listen to any LIVE broadcasting over the TV, radio and live internet streams. This type of musical content is characterized by the fact that it occurs simultaneously with its original prototype but at a different place.

The second type is a major group called asynchronous audio content. Those are the ones we get when we reproduce records. Sources of such contents are not only the radio and TV but also vinyl records, CD’s, DVD’s BR, all the computer musical formats (lossless and lossy), reproduced by variety of players (hardware and software based).

One might ask himself a simple question. Why was it necessary or important to define the term original audio content when most of the people are basically listening to reproduced one (recordings)? The answer to that question reclines upon a simple fact. That is – every musical and audio contend (synchronous or asynchronous) is derived by an original content which is the prototype. There is one exception here and that is the music produced by electronic instruments and synthesizers.

To put things into perspective

The original audio content is characterized by certain quality indicators. A reproduced content is derived by the corresponding original one with a certain level of adequacy and it has the same quality characteristics. Those characteristics however, have different values close to the original, but not quite.

The tendency is of course positive. They can be represented by the following simple equation:

In other words the equation says that the difference between the original content and the reproduced one tends towards zero.  Unfortunately this is just a tendency but not a reality.

An ever lasting reducing between the quality of the reproduced content and the original should be the primary goal of the audio electronics manufacturers. However that might not be the case in the present situation.