This project started as a experiment after reading the Solidophono article at TNT-Audio website. I was interested in the SSM2017 opamp so I’ve decided to give it a try.

On my project I’ve decided to go for a bit different topology using a split RIAA equalization. All my previous projects were created using a traditional passive equalization so I was exited to see the results.

The whole preamp is made of two stages. The first one is built around the SSM2017 amplifier from Analog Devices.
http://www.analog.com/static/imported-files/data_sheets_obsolete/139484016SSM2017.pdf
One could use the modern substitutes – SSM2019 or INA217. The gain of the first stage was set at 60dB! The second stage uses the OPA627 opamp from Texas Instruments. One could experiment with a variety of opamps here. The gain was set to 2. I used a jumper to change the second stage gain to unity in case no further amplification was needed.

The complete schematic for this project can be downloaded >>> HERE <<< Some pictures of the finished PCB. The project is using two separate aluminum boxes. One for the PSU and one for the preamp PCB itself.

The finished PCB inside a nice aluminum box. 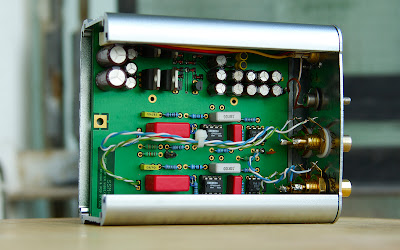 The four voltage regulators are placed on the PCB. I’m using a small 20VA toroidal transformer to power up the whole thing. Here is the PSU section:

As you can see, this is a serious power supply. Such configuration could be seen in some expensive power amplifiers. Such a PSU has a very high ripple suppression and since the current demands are no big issue in RIAA preamps, it’s affordable and easy to build as well.

So how does it sound?
Well, I’m not going to describe my own creations as my judgement could be a bit subjective. However I could say this preamp has some very good dynamics with good transient attack.

I encourage you to try this project and see for yourself.

WARNING: The project is provided to the DIY community for free. As such it can only be used for personal needs and NOT for commercial usage.

THANKS FOR READING THIS ARTICLE.